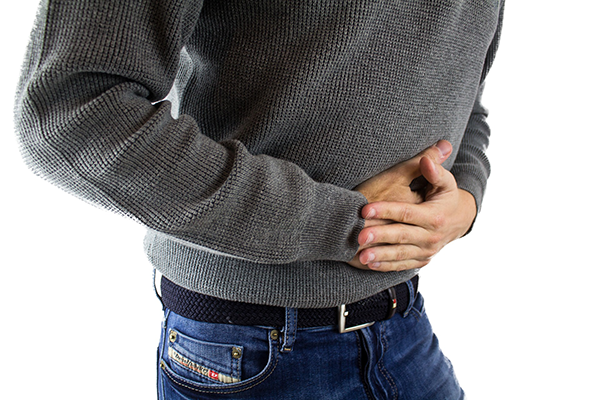 A peptic ulcer is a round or oval lesion that occurs after gastric or duodenal mucosal destruction by gastric acid or digestive juices.

Ulcers penetrate the lining of the stomach or duodenum (the first part of the small intestine).

Gastritis can evolve to peptic ulcer. The names of the different types of ulcers indicate their anatomical location and the circumstances in which they occurred.

As with acute stomach gastritis, in the event of overuse of the body caused by severe illness, burns or trauma, stress ulcer may occur. This type of ulcer can occur both in the stomach and duodenum.

Ulcers occur when the lining of the stomach or duodenum is inflamed chronically or when exposed to irritating agents such as excess acid and gastric enzymes (pepsin). Each person secretes acid in the stomach, but only one in 10 people develop stomach ulcers at some point in their lifetime. Each person generates a different amount of gastric acid, and the type of individual acid secretion usually persists for life. People who normally have more acid secretion (acid hypersecretion) are at greater risk of making peptic ulcer than those who are less secretive (hyposecretion).

Usually, peptic ulcer heals and then reactivates. Thus, pain is present for several days or weeks, and then it is attenuated or disappeared.

Symptoms vary depending on the location of ulceration and the age of the person. Children and elderly people usually do not have the usual symptoms of the disease or can be completely asymptomatic (in these situations, ulcers are only discovered if complications occur). Only 50% of people with duodenal ulcer have typical symptoms, i.e. pain with burning or deafening pain, local discomfort, empty stomach and hunger.

The pain is constant and has moderate or moderately severe intensity, usually located immediately below the sternum.

In many people with duodenal ulcer, pain is absent when awakening from sleep, but occurs in the morning.

Milk intake or antacids usually relieves pain, but it reappears after 2-3 hours. Often, pain awakens the person at night. It is common for patients to experience painful pain once or several times a day for a period of one to several weeks, and then the pain disappears even without treatment.

Symptoms of gastric, marginal and stress ulcers, unlike those of duodenal ulcers, do not have a specific evolution. Ingestion of food may relieve pain temporarily or aggravate pain.

Gastric ulcer sometimes produces tissue swelling (edema) from the level of communication between the stomach and the small intestine so that food can not be discharged normally from the stomach. This obstruction can cause bloating, nausea or vomiting after a meal. Complications of peptic ulcers such as haemorrhage or gastric wall rupture are accompanied by symptoms that indicate a decrease in blood pressure such as dizziness and fainting.

Most ulcers heal without complications, but in some situations, they produce potentially fatal complications such as penetration, perforation, bleeding and obstruction.

The doctor suspects the presence of an ulcer when the patient experiences characteristic pain. Sometimes the person is treated for the ulcer, following the symptoms, which suggests that the patient had an ulcer that healed. It may be necessary to use specific procedures to confirm the diagnosis of ulcer, especially when the symptoms do not disappear after a few weeks of treatment because gastric cancer can produce similar manifestations.

Also, when there are severely resistant ulcers, especially if the patient has multiple ulcerations or is located in unusual regions, the doctor should try to identify the underlying disease that causes acidic gastric hypersecretion.

To diagnose ulcers and determine their cause, endoscopy or radiography after barium administration (a contrast substance that is deposited on the walls of the digestive tract so that they become visible) can be used. Using the endoscope, a biopsy can be performed (taking a tissue sample for microscopic examination) to determine if it is a benign or malignant gastric ulcer, and to identify Helicobacter pylori bacteria. The endoscope is also used to stop acid bleeding and reduce the risk of gastric ulcer bleeding. Bariatric transduction of the stomach and duodenum helps determine the severity and size of an ulcer, which sometimes can not be fully observed during endoscopy.

Since Helicobacter pylori infection is a major cause of ulcers, patients often receive antibiotics.

Neutralization or reduction of gastric acidity with drugs that directly inhibit acidic gastric production promotes healing of peptic ulcers regardless of their cause. For most people, treatment is continued for 4-8 weeks.

There is no evidence to support the idea that uncooked diets hurry or prevent recurrence of ulcers, although these diets contribute to reducing gastric acid production.

However, patients are advised to avoid foods that aggravate their pain and bloating.

It is also important to avoid gastric irritants, such as nonsteroidal anti-inflammatory drugs, alcohol and smoking.

These are the medicines most commonly used in ulcer treatment:

Surgery - is rarely needed today, by medication, ulcers heal very well, and through endoscopic intervention can stop active bleeding. Surgical intervention is primarily involved in the treatment of peptic ulcer complications such as perforation, the obstruction that does not respond to medication or recurrent obstruction, the existence of two or more episodes of ulcer haemorrhage, suspicion of malignant gastric ulcer or severe cases and recurrences frequent peptic ulcers. Several types of surgical procedures may be used to treat these problems, but each one produces specific complications such as weight loss, digestive disorders and anaemia.

An infusion of walnut leaves used in your bathtub's water.

Lack of Joy to Live

You can control your body

Arnica for bruises and scars

Can men get candida as well as w

Can men get candida as well as women?

The weapon against cholesterol

Remedy against the cold.

Do You Have Constipation Problems? Here Are Some Natural Laxatives.

Garlic and honey balsam for eczema

In case of indigestion, you can use Salvia

Remedies That Help You Get Rid Of Laryngitis.

Get rid of dark spots in a natural way.

Help yourself in menopause

Natural remedies for the prostate.

Tasty Teas To Make Your Day.

No more wrinkles in a natural way.

« Tonic
Therapy
Urinary Infection »
« BACK
UP
NEXT »