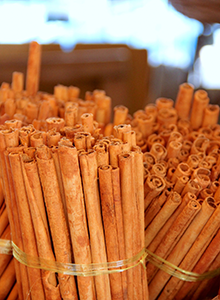 Cinnamon is a spice that is made from the inner bark of trees scientifically known as Cinnamomum.

It has been used as an ingredient throughout history, dating back as far as Ancient Egypt. It used to be rare and valuable and was regarded as a gift fit for kings.

These days, cinnamon is cheap, available in every supermarket and found as an ingredient in various foods and recipes.

Cinnamon is made by cutting the stems of cinnamon trees. The inner bark is then extracted and the woody parts removed.

When it dries, it forms strips that curl into rolls, called cinnamon sticks. These sticks can be ground to form cinnamon powder.

The distinct smell and flavor of cinnamon are due to the oily part, which is very high in the compound cinnamaldehyde.

Scientists believe that this compound is responsible for most of cinnamon's powerful effects on health and metabolism.

Researchers have concluded that cinnamon health benefits can be obtained in the form of its pure bark, essential oils, in ground spice form (which is bark powder) or in extract form when its special phenolic compounds, flavonoids and antioxidants have been isolated. These compounds make cinnamon one of the most beneficial spices on earth, giving it antioxidant, anti-inflammatory, anti-diabetic, anti-microbial, immunity-boosting and potential cancer and heart disease-protecting abilities.

Description. Symptoms. Treatment. Recommendations.
« BACK
UP
NEXT »

« Chaparral
Dictionary
Cloves »
« BACK
UP
NEXT »