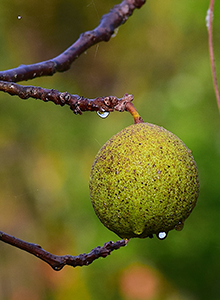 Juglans nigra, the eastern black walnut, is a species of deciduous tree in the walnut family, Juglandaceae, native to eastern North America. It grows mostly in riparian zones, from southern Ontario, west to southeast South Dakota, south to Georgia, northern Florida and southwest to central Texas. Wild trees in the upper Ottawa Valley may be an isolated native population or may have derived from planted trees.

Black walnut is an important tree commercially, as the wood is a deep brown color and easily worked. The fruits, walnuts, are cultivated for their distinctive and desirable taste. Often, trees are grown for both lumber and walnuts simultaneously and many cultivars have been developed for improved quality nuts or wood. Black walnut is currently under pressure from the thousand cankers disease that is causing decline of walnuts in some areas. Black walnut is also allelopathic, which means that it releases chemicals from roots and other tissues that harm other organisms and give the tree a competitive advantage; this is often undesirable as it can harm garden plants and grasses.

Black walnut is used to treat parasitic worm infections and certain other infections including diphtheria and syphilis. It is also used for leukemia.

Some people use black walnut as a gargle, apply it to the scalp as hair dye, or put it on the skin to treat wounds.

Description. Evolution. Treatment.
« BACK
UP
NEXT »

« Black Locust
Dictionary
Blackcurrant »
« BACK
UP
NEXT »