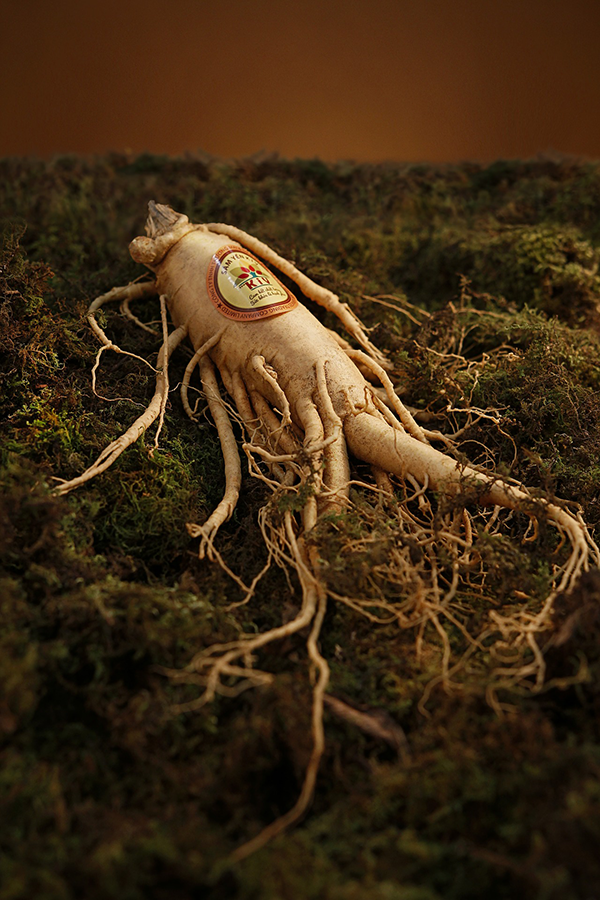 Perennial species that grow slowly in the forested mountains of northeastern China and Korea. The leaves are long petiolate, compound, made up of five oval follicles, sharp at the top. The flora stem is usually formed in the fourth year of vegetation, and the roots reach maturity after 4-6 years when their appearance is similar to the human body. In spontaneous flora it is protected by the laws of nature protection.

In the first year, the plant has only three leaves and is often confused with the strawberry plant. From the second year, the plant starts to have more leaves(four, even five), growing horizontal with the ground.

The fame of ginseng has spread over the last decades almost everywhere in the Western world. In addition to the Asian species, a whole series of related species are known, of which the most familiar are American ginseng (Panax quinquefolius) and Japanese ginseng (Panax japonicus). Siberian Ginseng (Eleutherococcus senticosus) does not belong to the genus Panax and does not contain its specific active substances.

To reach maturity, the ginseng roots need an average of about 5 years, and this is one of the reasons why phytotherapeutic preparations in ginseng are quite expensive.

The roots change rapidly by requiring the application of stabilization procedures, such as treating with a stream of water vapor.

Ginseng, one of the most popular herbs, is known for helping the body to cope with stress better.

Because of its multiple, varied and complex effects, Ginseng's recommendations are exhalable: boosting physical and mental capacity, adapting the body to adverse environmental conditions, overloading, and exogenous side-effects.

It has been clinically proven that Ginseng-based extracts have anti-toxic and protective action, being recommended to cure alcohol intoxications or other harmful substances.

Due to the immunostimulatory and favourable effect on memory, in combination with other phyto-complexes, it is considered a remedy in ageing phenomena.

Ginseng itself seems to be a toxic herb, at least when the usual doses are not exceeded.

Ginseng preparations are not given concurrently with other stimulants or beverages or desserts containing caffeine.

It is recommended to avoid ginseng during pregnancy and lactation.Ginseng is administered with caution to hypertensive patients.

Other possible adverse interactions have been mentioned with regard to: digoxin, estrogens, corticosteroids, monoamine oxidase inhibitors, warfarin, heparin, aspirin.

There are worrying data about commercialized ginseng preparations. According to the results of checks carried out by various control bodies, ginseng preparations are some of the most counterfeited of all phytotherapeutic preparations in circulation on the world market and almost half of the products on the American market do not meet the quality requirements imposed by consumer protection bodies .

Description.
« BACK
UP
NEXT »